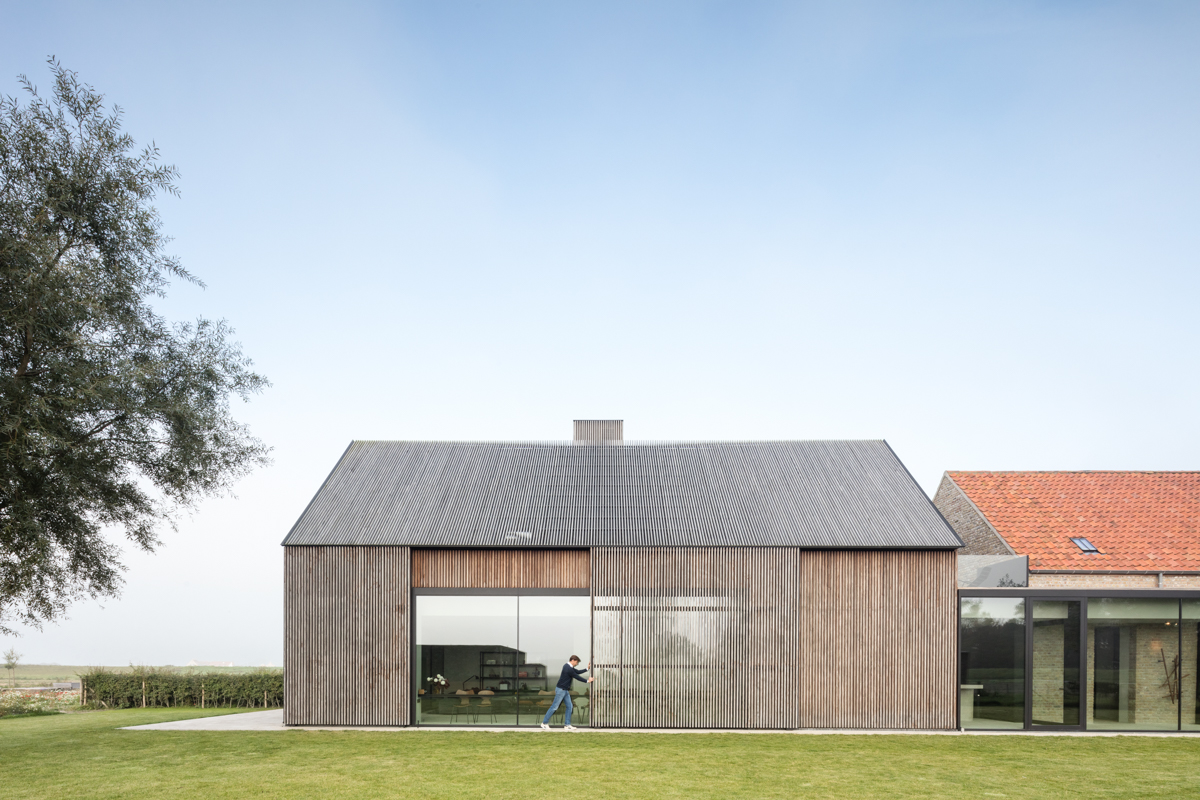 Situated among vast fields, quiet sheep herds and slow morning sun in Belgium, a heritage structure has been restored into a newly opened B&B. The impressive structure which was originally a fort for Belgian soldiers in the late 1700s, has been completely renovated by a Belgian family with a love for architecture.

The property A restored army fort from 1785 restored to combined private residence and B&B. The B&B has five rooms. 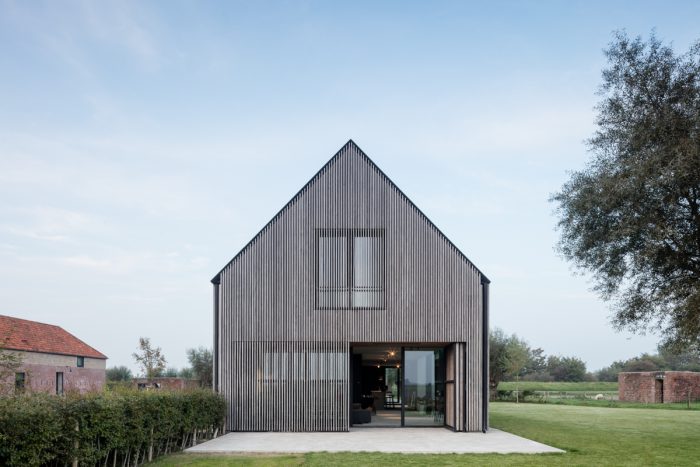 Knokke-Heist is a beautiful rural area at the North-Eastern seaside of the Belgian coast. The area is adjacent to the Dutch border, the two countries separated by the Zwin nature reserve. Originally a vacation heaven for urban families of Brussels in the early 19th century, the area grew into a resort town with an upscale clientele of artists such as James Ensor and Alfred Verwee. Today, Knokke is best known for its beautiful shorelines and beaches and for the dike system from which the area originated. 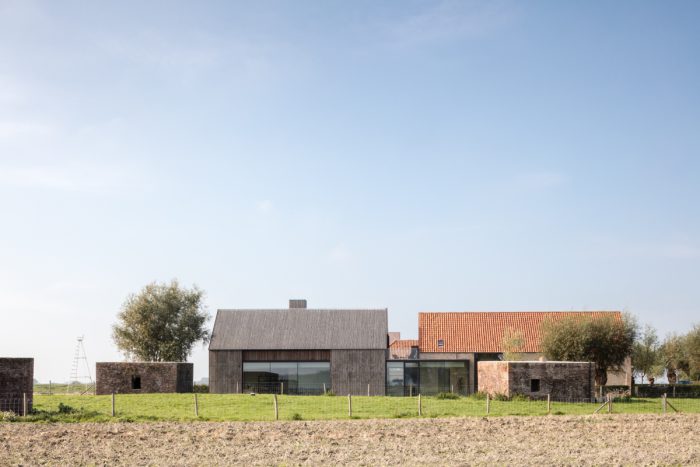 Axel De Bisscop grew up around 2 km from the property with his parents. „Every time we went by the property, I dreamt about living there some day. As I got older, I kept thinking if the property would ever be put up for sale. There’s just something about the scale of the buildings and the brickwork that has always drawn me in.“, says Axel. One day, Axel’s dream came true, when the property went on the market: „It was an amazing strike of luck. And it is such a nice feeling to wake up every day and almost be able to wave to my parents across the fields.“

„The Bunkers“ as the property is aptly named, was originally built in concrete on the brink of 1st world war. During 2nd world war, bricks were added to the concrete construction. Today, the brickwork appears in an eye-catching pattern of red and yellow colours. „It’s quite a funny story about the bricks. The original bricks were burnt on site and came out in a red tone. Then in the 1970s, the farmer who owned the property at that time wanted to raise the ceiling height. So, he lifted the roof off of the house, bought some bricks and had them burnt on another location. And they came out yellow. So today, the original building is two-toned, which we are actually very happy about.“, says Axel. The Bunkers consists of a main house and barn in the original materials. A wooden extension has been added to the barn, which hosts the bed & breakfast. Axel and Margaux live in the main house. One of the four original bunkers dating from the first world war now serves as henhouse, inhabiting the land side by side with the family’s twenty sheep. 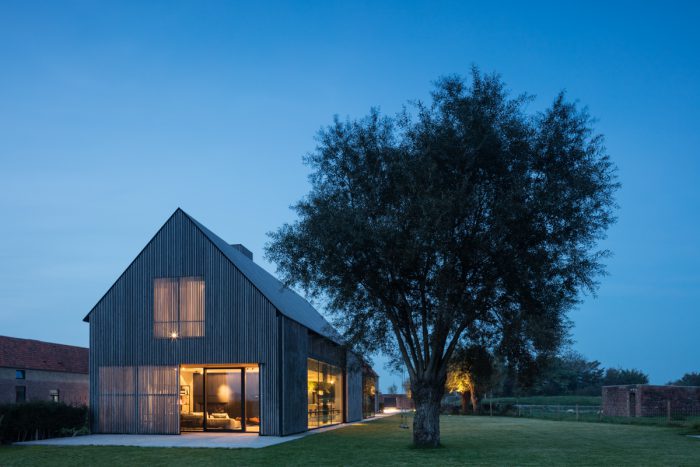 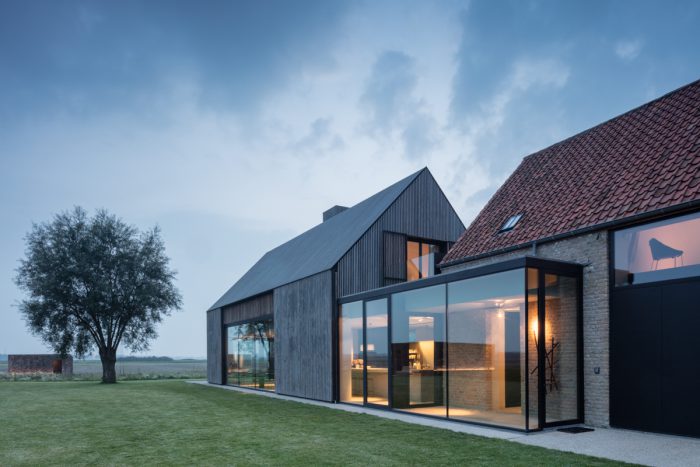 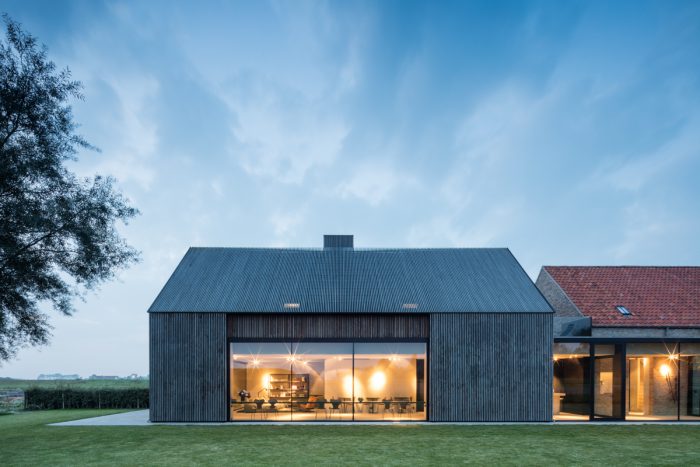 Unique features of the property

The Bruges-based practice, Architectuurburo Govaert & Vanhoutte was asked to extend the original farmhouse – which was once a fort – to suit the family and visiting guests. The two brick buildings were once used as a watch house and a jail, and formed part of an earlier fortification on the Belgian-Dutch border near the town of Knokke. Both buildings have been prolonged with wood extensions and has had metal-framed windows added to their facades. The family had a tunnel dug out 1.5 meters under ground between the main house and the pool/sauna, which is situated below the B&B, so you avoid the freezing cold in the winter time. The tunnel is 2.5 tall from floor to ceiling. The original floors can still be found in the old barn, which is now home to the B&B. The floor is made from concrete mixed with large rocks. „The Observer“ is an art piece in the form of an observation post, which allows you to gaze on 8 km’s of open fields and breath-taking nature of the area. Knokke-Heist is one of the only places in Belgium with uninterrupted landscape as far as the eye can see. About their favourite aspect of the property, the family says: „We have always loved the property, but what we especially love is the combination of old and new in the architecture.“ 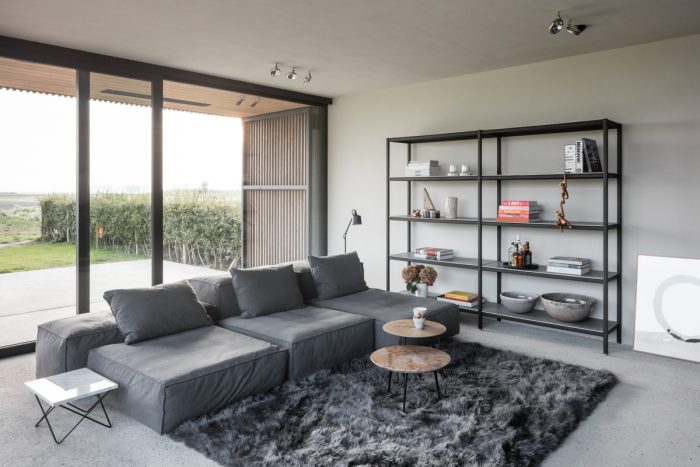 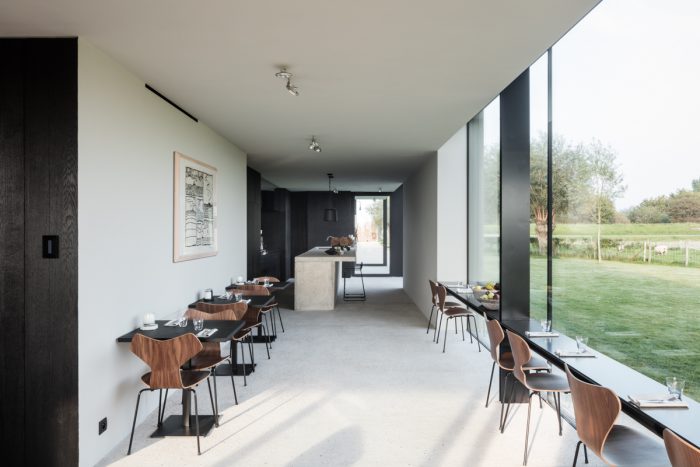 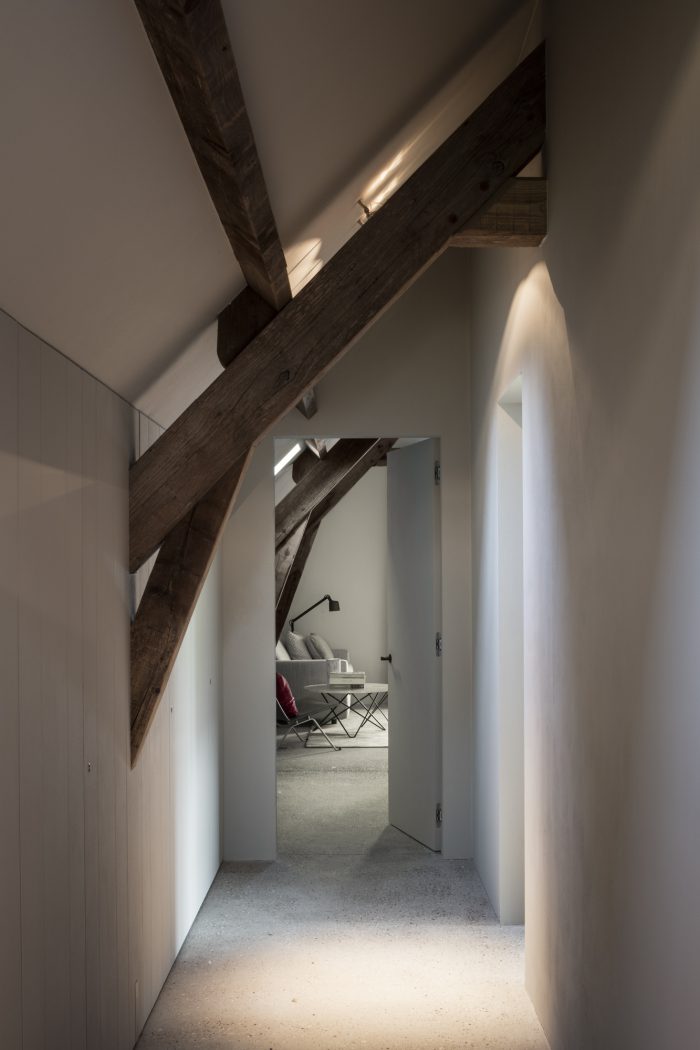 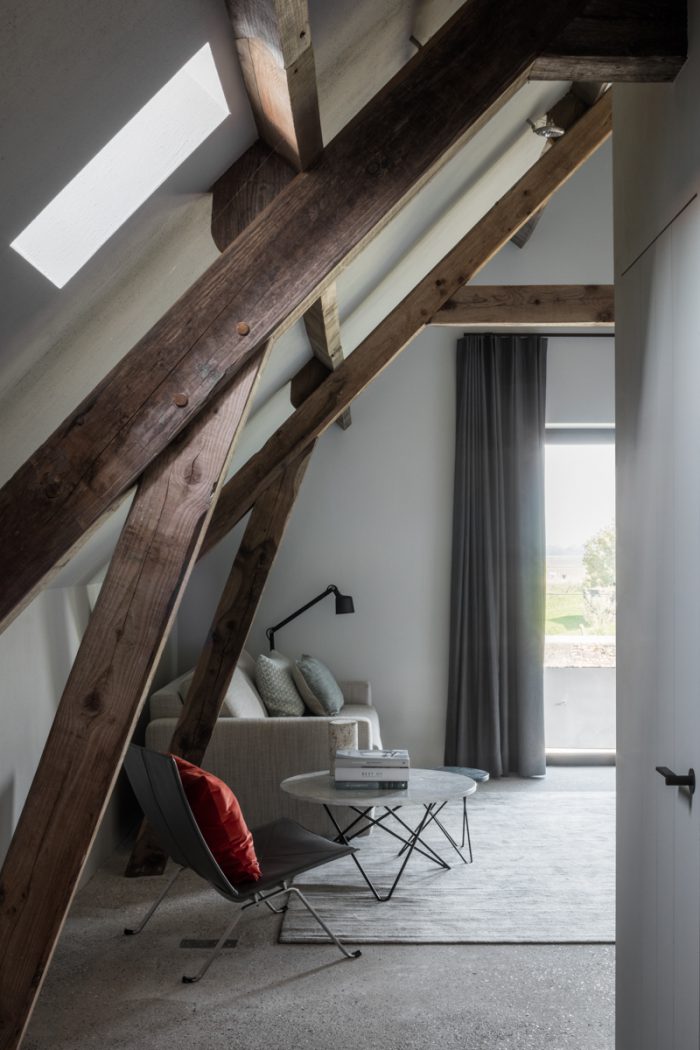 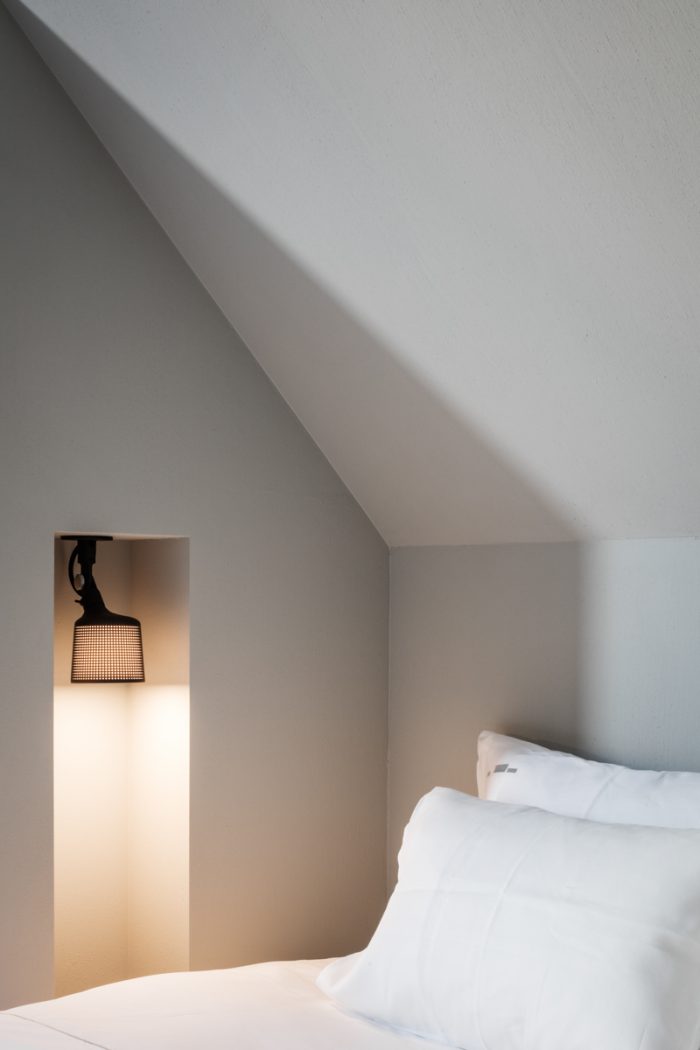 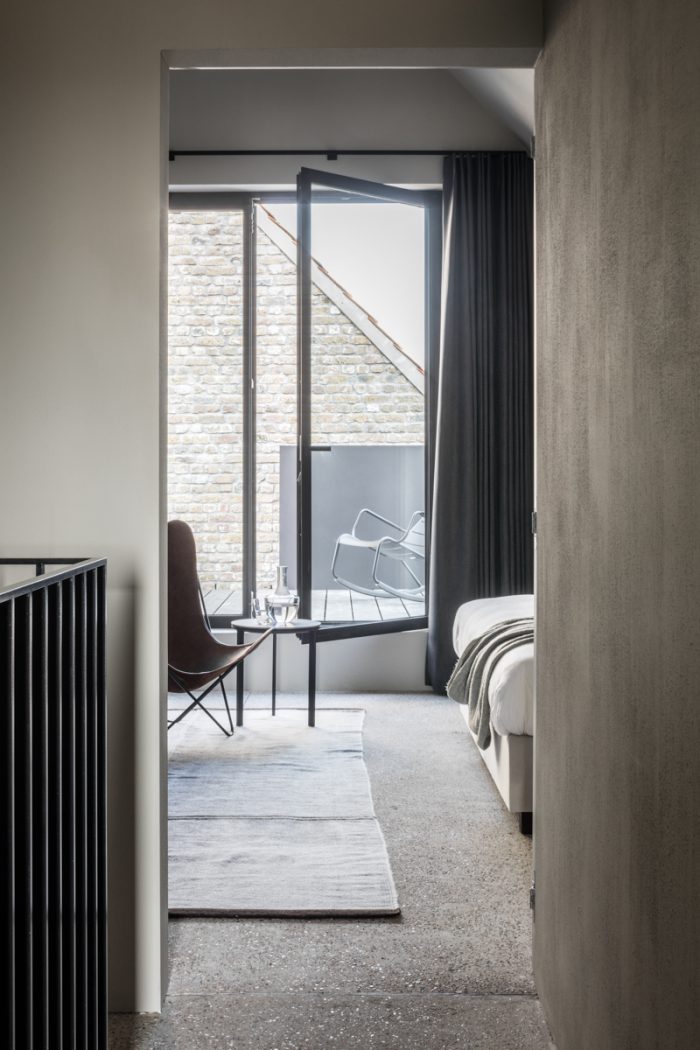 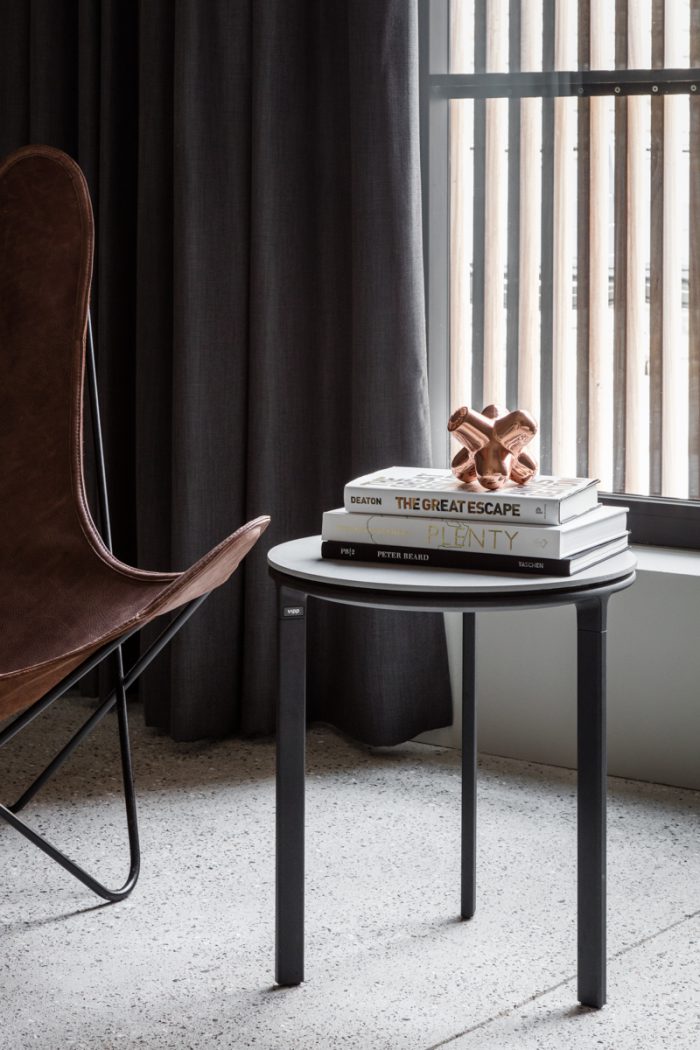 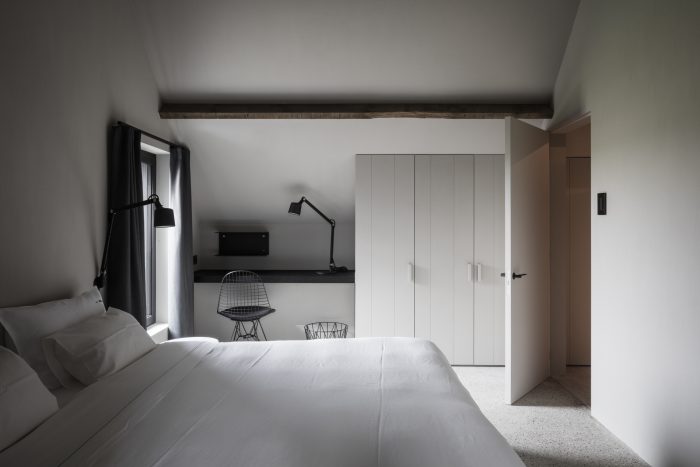 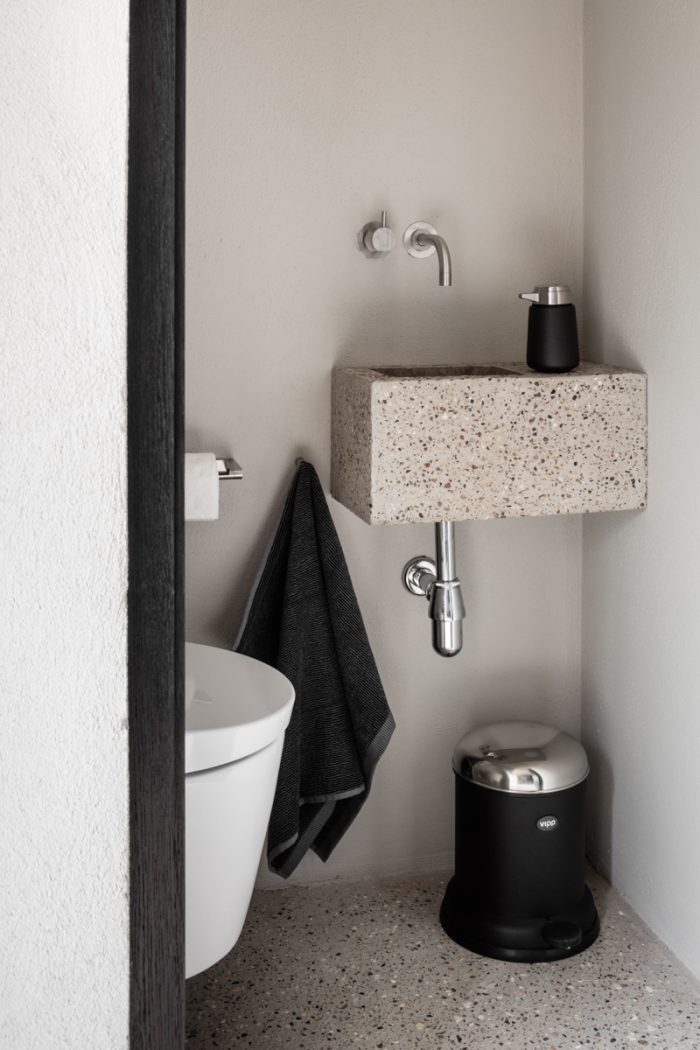 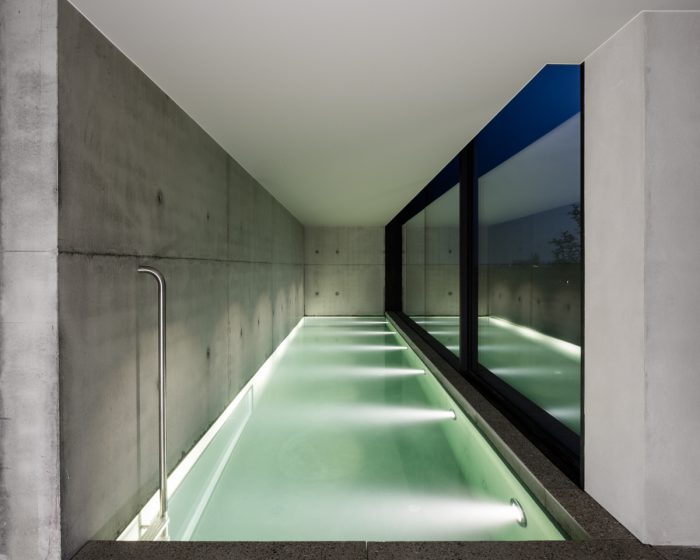 „We set out for the kitchen to be our favourite room of the B&B, and we wanted it to be an area that our guests could really enjoy. And we were not disappointed.“, says Axel. The couple has opted for a kitchen in black powder-coated steel from Danish brand Vipp, which has a legacy in steelwork. „We have acquired quite a few Vipp products over the years, and one day we were browsing across Vipp’s website and discovered that they not only make products for the home, but they also make an entire kitchen!“, says Margaux and continues „We really fell in love with the industrial look of the kitchen, and when we experienced it for the first time in real life, we could see that it was also very robust. Which is important when used in a professional context such as a B&B. That was a big plus for us, since we like our guests to actually use the kitchen every day, it’s not just for show.“ The black kitchen was an ideal match for the concrete details of The Bunkers, and the modular concept of the Vipp kitchen made it possible for Axel and Margaux to choose a configuration that matches the needs of hosting a B&B. 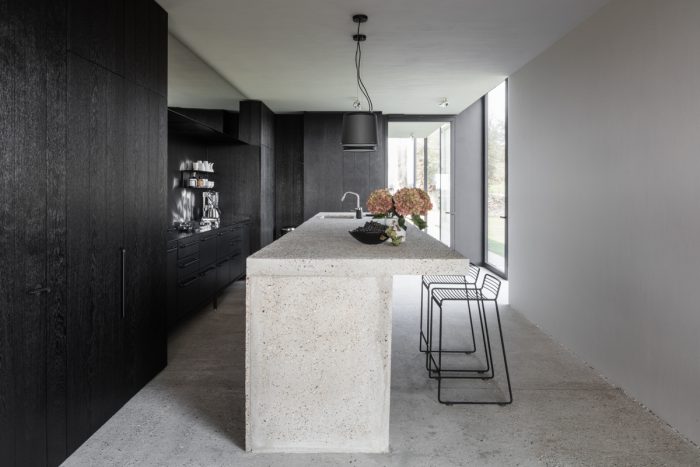 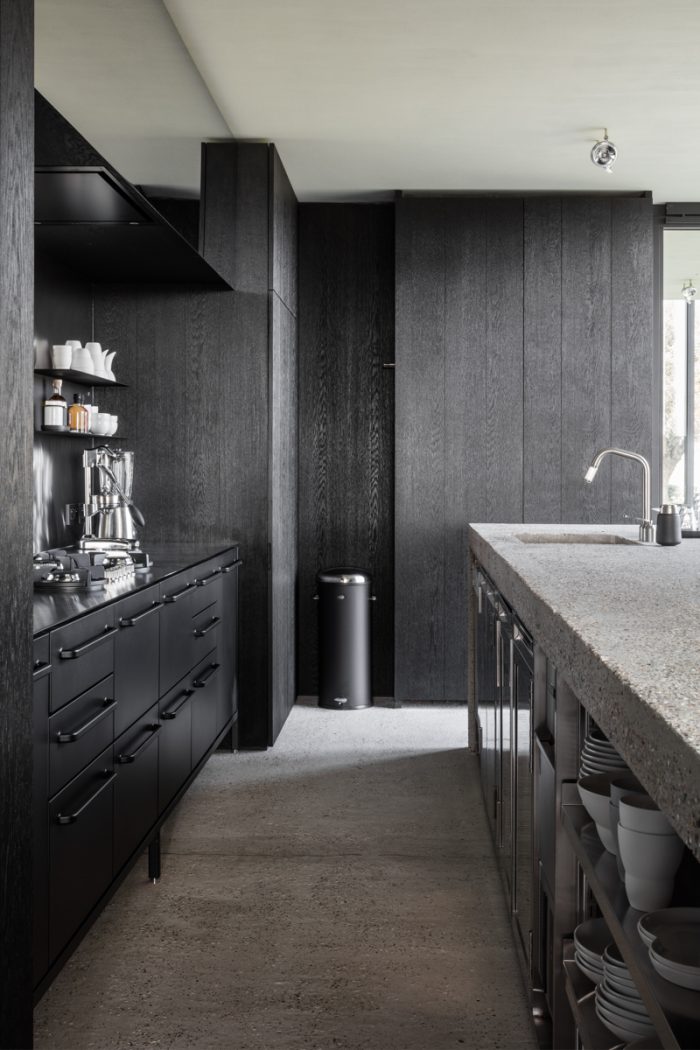 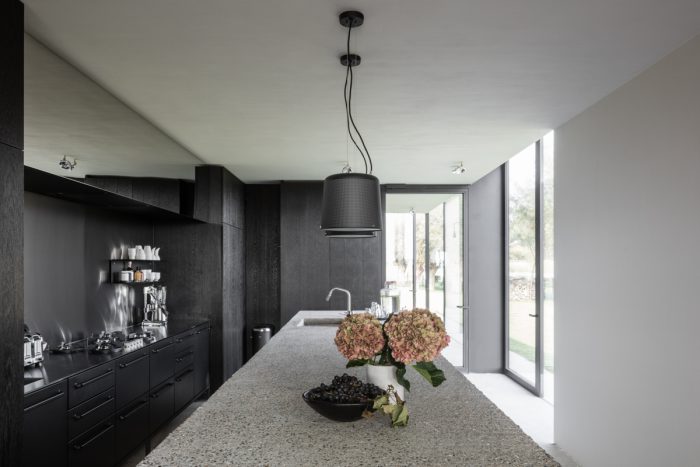 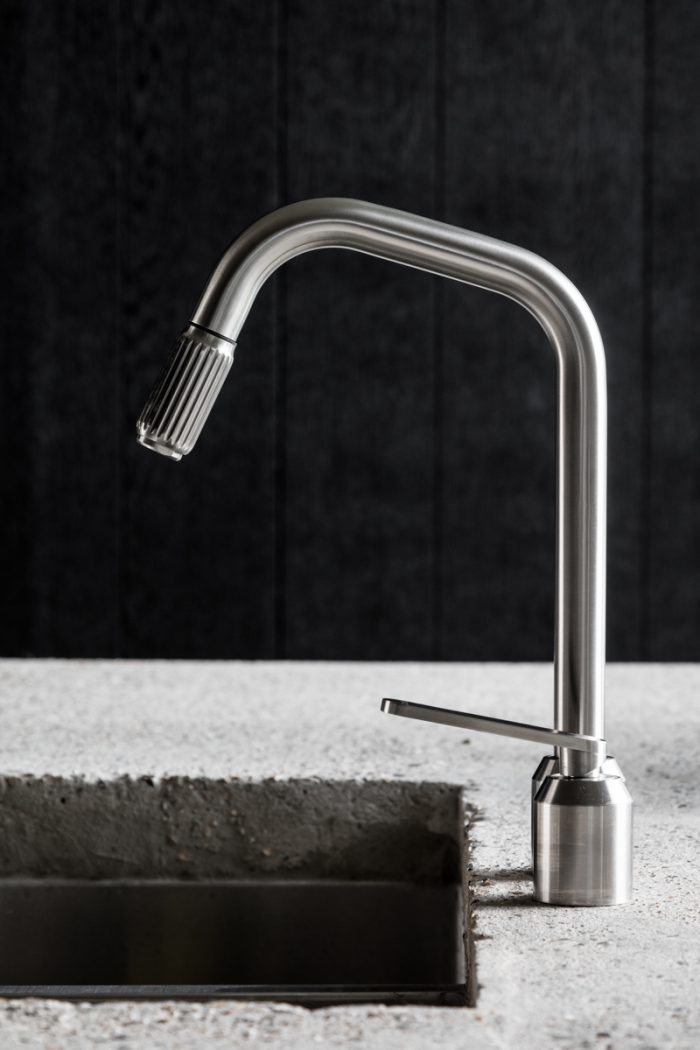 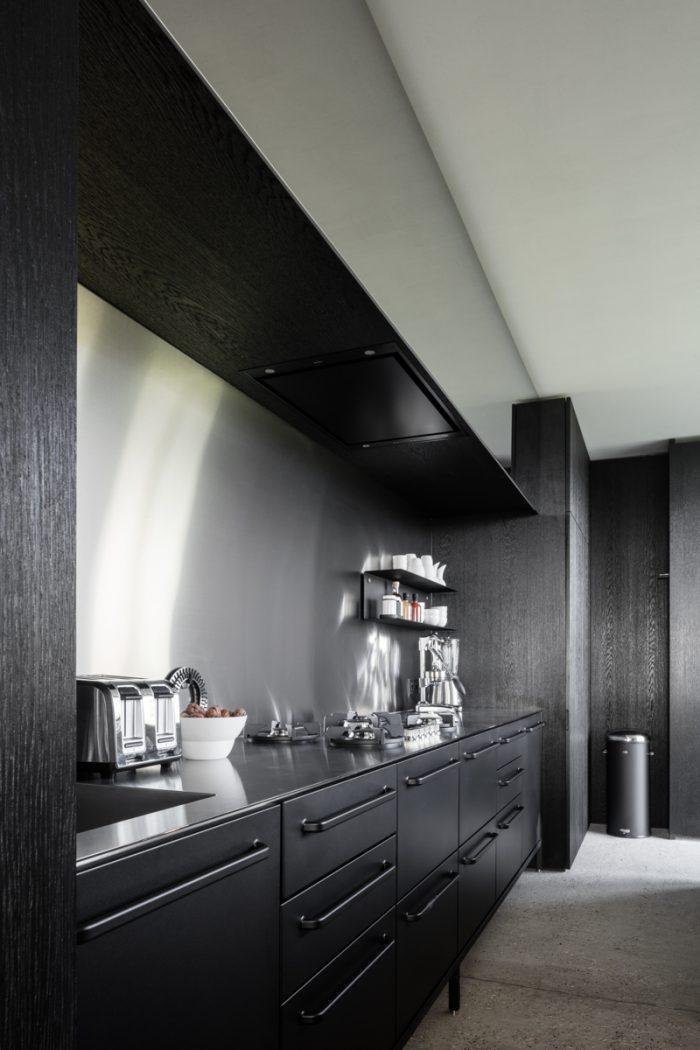 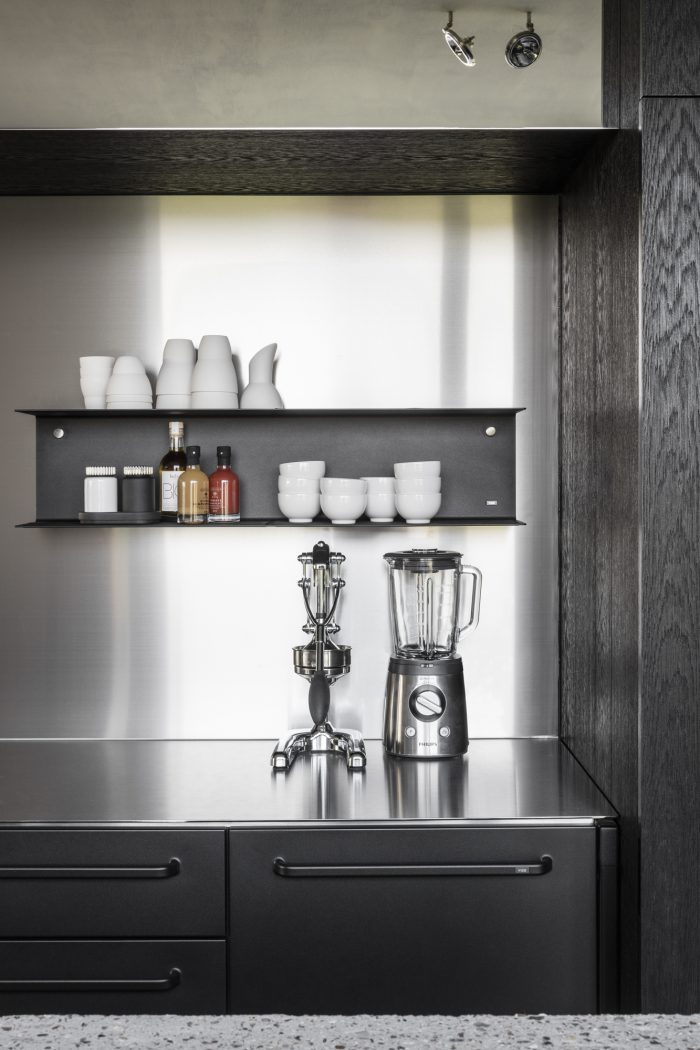 Although opening a B&B was not something Axel and Margaux had really planned for, the idea came to them when the property went on the market. „When we saw The Bunkers was for sale, we were ready to sign the purchase contract on the spot. But we had to find out what to do with all that space. A B&B seemed like the ideal choice, because we really like the idea of people coming to experience the unique nature and surroundings of Knokke.“, says Axel. A visit to The Bunkers B&B is indeed an opportunity to explore the unspoiled nature of Belgium. The area around The Bunkers is a protected bird sanctuary, which allows for unlimited explorations of the nature and wildlife. „We imagined The Bunkers as an exclusive retreat, where you can recharge your batteries. We wanted to offer the complete package; you can relax, explore, swim and socialize. Everything is available within our 250m2. And you can eat your breakfast to the view of fields and sheep, what more can you wish for?“, says Axel. 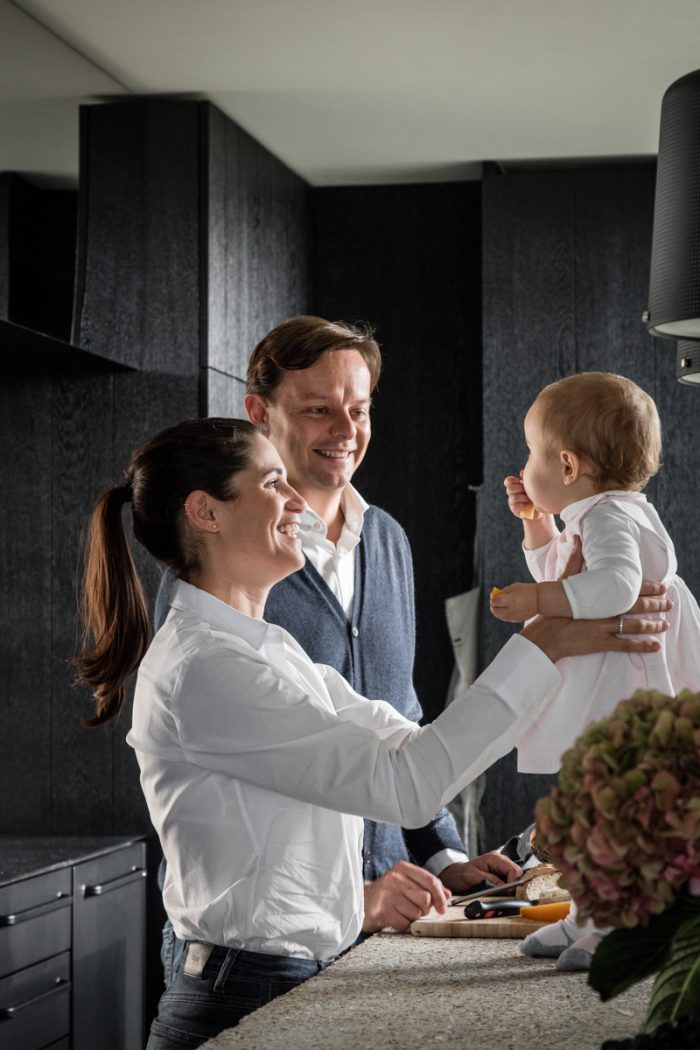 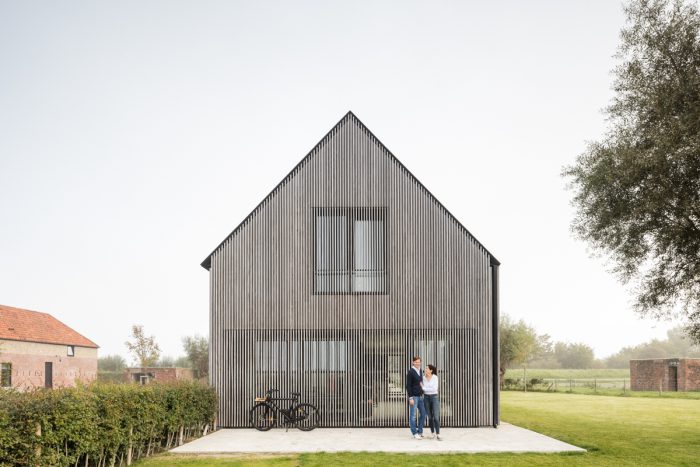