At the southernmost point of the Norwegian coastline by the village of Båly, Snøhetta has designed Europe’s very first underwater restaurant. With its immediate proximity with the forces of nature, the restaurant, which will also function as a research center for marine life, is a tribute to the Norwegian coast and to Lindesnes – to the wild fauna of the sea and to the rocky coastline of Norway’s southern tip. 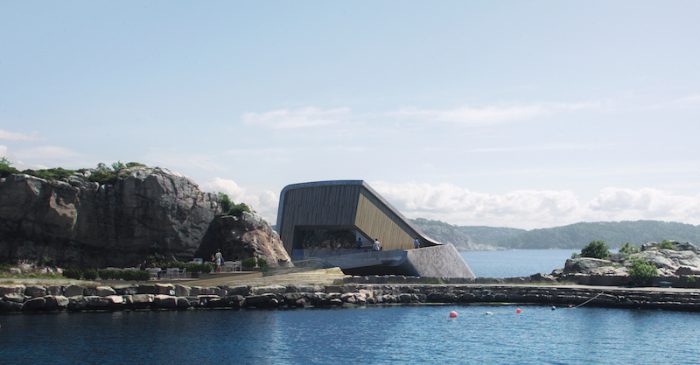 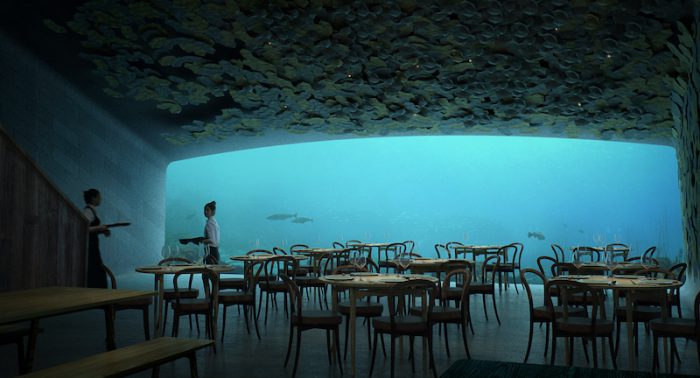 Under’s namesake holds a double meaning: In Norwegian, “under” can just as well be translated into “wonder.” Half-sunken into the sea, the building’s monolithic form breaks the water surface to lie against the craggy shoreline. More than an aquarium, the structure will become a part of its marine environment, coming to rest directly on the sea bed five meters below the water’s surface. With meter-thick concrete walls, the structure is built to withstand pressure and shock from the rugged sea conditions. Like a sunken periscope, the restaurant’s massive acrylic windows offer a view of the seabed as it changes throughout the seasons and varying weather conditions.

Under has been designed with sensitive consideration for its geographic context and aquatic neighbors. The sleek, streamlined form of the building is encapsulated in a concrete shell with a coarse surface that invites mussels to cling on. Over time, as the mollusk community densifies, the submerged monolith will become an artificial mussel reef that functions dually to rinse the sea and naturally attract more marine life to its purified waters. Muted lighting from the inside of the restaurant and installed on the seabed will help stage the wildlife flourishing on the sandbank outside the 11 x 4-meter panoramic acrylic window.

The restaurant will also welcome interdisciplinary research teams studying marine biology and fish behavior. Researchers from Norwegian research centers will among other seek to train wild fish with sound signals and will research whether fish behave differently throughout the shifting seasons. The researchers will also help create optimize conditions on the seabed so that fish and shellfish can thrive in proximity to the restaurant.

Informational plaques will be mounted alongside the trail leading guests to the restaurant entrance at the water’s edge. This informational path tells a story about marine biodiversity and the Norwegian coast, weaving the narrative of the site into the overall restaurant experience, and ends at a ramp up to the restaurant. Here, the entrance is clad in untreated, locally sourced oak that will eventually fade into grayish tones, harmonizing with the raw concrete. On a day of rough sea, you can feel a hint of fresh, salty ocean spray against your face as you enter the restaurant.

The restaurant’s color palette follows the logic of the different stories of the construction. While the champagne bar is characterized by colors inspired by the coastal zone, with its subdued colors evoking the sediment of shells, rocks and sand, the dining room is submerged in darker blue and green colors inspired by the seabed, seaweed and rough sea. The warm oak of the restaurant interior contrasts with the rough concrete shell, creating an intimate atmosphere. Materials are chosen not only for their aesthetic qualities, but also for their sustainable characteristics and ability to create a good indoor climate. Advanced heating pump technology that utilizes the stable seabed temperature functions to heat and cool the building year-round.

Through its architecture, menu and mission of informing the public about the biodiversity of the sea, Under will provide an under-water experience inspiring a sense of awe and delight, activating all the senses – both physical and intellectual. 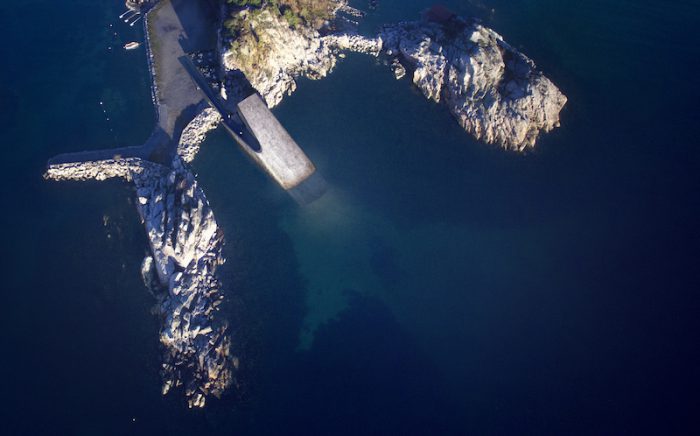